I wanted to bring you this post as a bit of an update of where I am with my person fitness. To give you a bit of background, I started running when at the beach in June and have been pretty religious about doing it at least 5 times a week since then. This is I admit a lot of running and a big drain on my body and although I advocate not overdoing it I do have a tendency to push myself. Having said that, some of my runs have been very gentle and I have complemented my running with sports specific yoga using the techniques from Yoga Sport Science®. I have however hit a few bumps in the road, so to speak, and I thought I would use this post to explain them and the problems they are causing me. Before that though I’m going to start by giving you a bit of general info about what the Kinetic Chain is. 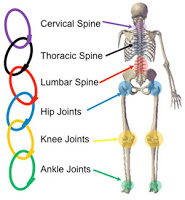 The basic concept of the Kinetic Chain is that there is a link between all the major joints in the body. If we think about it from a running perspective, as your foot lands on the ground the ankle will move to adjust to the terrain and this in turn will cause a reaction in the knee, hip, back and often all the way up to the shoulders and neck. This is why it is always important to consider the impact on the body as a whole. As an example, if you tend to over pronate your feet, or roll them inwards, this will have the impact of bringing the knees across the midline of the body making you knock-kneed. This is important to know as running in this way significantly increases your chance of rupturing your ACL.

So now you have an idea of the basics, let me tell you about me and the problems I am having. The first thing for me to tell you is that I tend to over pronate my feet and in the past this has caused me a lot of problems with the ligaments in and around my knees. The issues have been a lot less significant recently, largely down to the amount of yoga I do and my constant awareness of how I place my feet on the ground. However one of the minor things I have noticed is pain around the insertion of the Fibularis Longus, around the head of the fibular. This has caused me some discomfort but has not been enough to stop me running.
Now for the major issue, a little over a week ago I stubbed the big toe of my right foot really badly, my foot swelled up and I suspect that I might have broken it. I was really worried that this would stop me running for ages and it almost created a minor panic in me. Well after a week of rest I felt very little pain in my toe at all, I had a good range of motion and I thought I would go back to running. Yesterday my run was fine apart from a little discomfort in the toe at the end of the run but nothing significant. Now according to my training plan I was due to run 8km today and I psyched myself up for it. All was going well until the last 2km when I started to notice pain in my upper gluteal muscles and this was actually quite strong. As I continued to run I started to feel pain in my toe again which was getting more and more intense and actually caused me to cut my run short.
So the conclusion on my running is that because my toe was not 100% healed I had subconsciously developed a way of running that everted my right foot so I could reduce the push off from my big toe. However to do this I must have been pushing my right hip out and so causing tension in this area which eventually appeared as pain. As this pain increased my body adapted to receive it, this resulted in me bringing my foot more into a neutral position which meant I was having to put more weight through my toe and so the resulting pain. There are a few things I could have done to prevent this from happening in my eyes and they include giving myself more time to rest and then when coming back to training taking it more slowly and doing only short steady runs at first. This would have had a number of benefits, firstly it would have given my body more of a chance to getting back into running and secondly it would have allowed me to be more mindful of my body rather than focusing on getting through a hard run.

Well if you have read the above and my experience you can see that if you do not consider the kinetic chain then you may find yourself developing an unexpected injury. In a yoga session you can take time out to focus on the body and develop a detailed awareness of the body. Also if you work on a one-2-one basis with a Yoga Sports Coach you can do a Kinetic Chain analysis and see if there are any movements that are causing a detrimental knock on affect. Once you begin to work on these things you will find that your awareness is extended to all parts of your life and you will consider how you stand and move a lot more often. The more awareness you can bring to how your body is moving and how a movement may impact the whole body the greater chance you have of developing a healthy movement pattern that will keep your body working effectively for longer. I shared my experiences with you as it shows that even if you have a lot of awareness you can still block this for the desire to train but I have very quickly located the errors I have made and this is something I can then adjust before it becomes a significant problem.
If you would like to know more about Yoga Sports Coaching or how Krida Sports Yoga can help you achieve your sporting goals then please feel free to contact me or you could sign up for our newsletter for exclusive offers and articles.

My Dad's "Carrot Salad" Made Vegan